Main Articles and lessons Dark Cloud Cover Candlestick: Definition & Example. Why This Pattern is So Important for Traders
How to trade?
How to deposit?
Stop Loss
What is Forex?
Currencies in the Forex market
Geography of Forex
How to earn in the Forex market?
How to minimize risks?
How to enter the Forex market?
Forex and currencies: how currencies work in the market
Volumes of trading in the Forex market
Dynamics of exchange rates in the Forex market
Does Forex result in success?
Currency behavior in the Forex Market
The Forex market: history
George Soros and his unique deal
Warren Buffett: Philosophy of Success
The first steps of the trader
Forex deposit
Example of how to make money in Forex
Withdrawal of profits
Fundamentals of work in the Forex market
Styles of trading in Forex
How to choose a strategy
The Best Way to Learn Forex Trading
Company Earnings Calendar
How to Start Forex Trading
How to Choose the Best Forex Broker
What is Forex Trading?
The Forex Economic Calendar and how to use it effectively
Exchange Rate Definition
Volatility Definition and Meaning
Volatility Index (VIX) Definition
What is Market Capitalization Stock
VWAP: Volume Weighted Average Price Definition
Buying On Margin Definition
Pattern Day Trader Definition and Rule
Market Risk Definition
How to Invest in Penny Stocks
Stock Beta: What is High and Low Beta Stocks
Selling Short: how to short a stock
Automated Trading Systems: The Pros and Cons
How to Invest in Oil
Stocks After Hours
The Best Forex Trading Platform in 2021
Automated Forex Trading Software For Traders
Forex Trading for Beginners: how to Trade
Forex Market Hours: Open and Close Time
Best Currency Pairs to Trade and Invest
What are Forex Signals: All Types of Them
What Are Forex Robots: Automated Trading Robots
Forex vs Stocks Comparisons
Ichimoku Cloud Explained.How to Use Ichimoku Trading Strategy
When Does Wall Street Open. Holidays and Trading Hours of US Stock Markets
Morning Star Candlestick Pattern: Definition & Example in Trading
What is a Margin Call? Definition, Calculation, Price Formula & Example
Shooting Star Candlestick. How to Trade Like a PRO Using Shooting Star Pattern
What is an ETF? Different Types of Exchange Traded Funds and How They Work
MACD Indicator. What is MACD? How to Use It & Best Settings

Dark Cloud Cover Candlestick: Definition & Example. Why This Pattern is So Important for Traders

Points of the trend reversing are crucial for trading. Whenever a trend is about to change direction, the time comes for many investors to decide what to do with their stock of assets. Bearish reversal (downward shift) is perhaps more game-changing than the bullish one (upward shift).

There are many candlestick combinations used by traders to indicate the change of trend’s character: Evening Star, Shooting Star, Inverted Hammer, and so on. Dark Cloud Cover pattern is one of the rarer ones because it implies a more calculated and decisive shift, which doesn’t often happen on the market, chaotic as it is.

What is a Dark Cloud Cover?

Dark Cloud is a combination of three candlesticks that mostly arise near the resistance zone, at the top of the chart. The combination is as follows:

It’s important to note that wicks on all of these candles are generally small, especially on the middle candle. As mentioned, the move to drop the price must be relatively decisive and market-wide. Therefore, the extreme low and high prices (which the wicks demonstrate) are often very small compared to the bodies.

The ‘Dark Cloud Cover’ is an old name, dating back to the time when black and white candles were much more common than red and green ones. If you turn the first two sticks 90° counterclockwise, you’ll see that the big bearish candle almost completely hides the bullish one, as if a cloud. That’s what the name indicates.

What does Dark Cloud mean?

The appearance of one reverse pattern or another heavily depends on the preceding circumstances. The Dark Cloud candlestick happens when it’s become clear that the trend is going to change sometime before it actually did.

It may be due to the leaked news about the market in question or due to the shortages of volume when the trend was still climbing.

For this reason, the candles before the Cloud are often more-or-less short – the price doesn’t climb too decisively. The main sticks of the pattern are also rarely too long.

The prices usually climb just enough on the first day. Then, the market typically starts the next session with the price almost identical to the previous closing value (the trend still being considered a bullish one).

During the second day, the price slowly went down. That’s how the main bearish stick is created. On the third day, the traders usually lower the price just a little bit to confirm that the pattern has been proven correct. 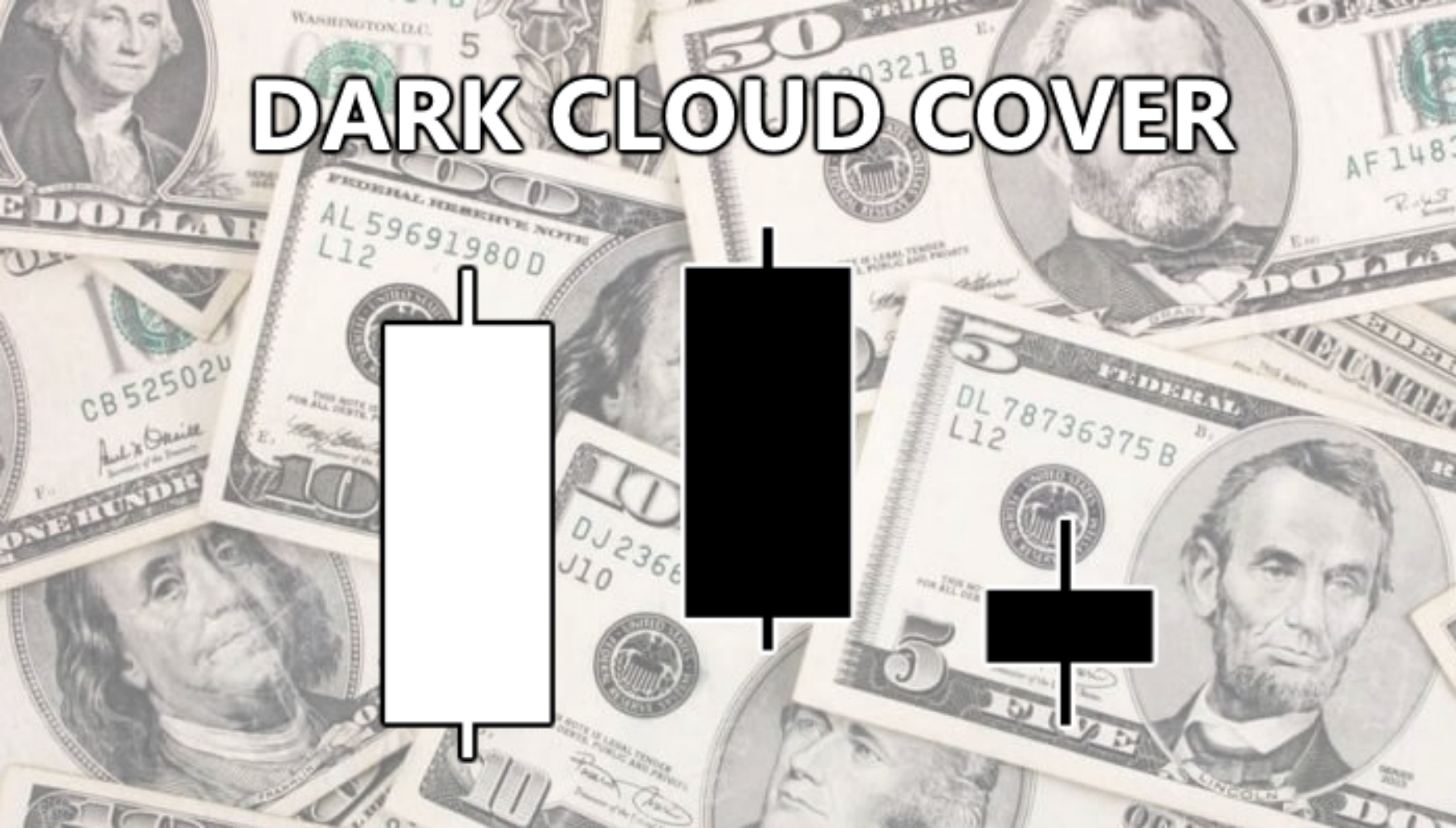 How does a Dark Cloud Cover come to be?

The DCC pattern can come up as a follow-up to some event that changes the market or is about to. Generally, however, the candlesticks form this way as a culmination of an already slow market.

As a consequence, the momentum of the market is not really accumulated, and it dies down fairly smoothly as soon as people realize the trend has reached its limits.

After that, the following bearish trend gradually accumulates momentum. The downward trend soon becomes more active than the previous upward trend, but then slows down. However, it only applies to the typical examples. The parameters may vary.

For instance, the candles may be much smaller than usual, in which case the effect on the market will also be not as significant as with standard-sized DCC candles.

How to use DCC?

The DCC needs confirmation because of its careful and smooth nature. The effect of the pattern relies on many parameters, such as demand, supply, trading volume, and so on. The second candle may very well be just a temporary bearish downturn, especially if the size of the candles isn’t what’s usually expected of a DCC.

The trend may yet bounce back up, and this is exactly the reason why most traders wait until the third day is over to confirm their fears or hopes.

So, if your decision is to sell your assets while the price is still high enough, it’s better to do it on the third day. The price isn’t going to change a lot on the third day anyway because everyone else is also waiting for the confirmation.

If something unexpected happens and the price does bounce back sharply, the resulting trend will be quite unpredictable, so it’s better to bail on the third day anyway.

How to predict DCC?

Unsurprisingly, Dark Cloud Cover follows some specific market rules, and you can keep a watch on them to anticipate the pattern properly.

Those bearish reversals that resemble DCC happen as a result of a decreased supply, decreasing volume and increasing demand. Whenever an asset is close to being overbought, the reversal happens.

In most situations that affect the volume, it’s a good idea to use the RSI (Relative Strength Index). This index shows on a scale from 0 to 100 how often the asset is sold compared to the recent sessions. Numbers over 70 indicate the overbuying, which will eventually deplete the stock and cause a reversal.

It also could be effective to watch exactly how much momentum the sales have. If the prices rise too fast, there will likely be some other pattern instead of the Cloud. The Clouds happen smoothly and slowly.