Main Articles and lessons MACD Indicator. What is MACD? How to Use It & Best Settings
How to trade?
How to deposit?
Stop Loss
What is Forex?
Currencies in the Forex market
Geography of Forex
How to earn in the Forex market?
How to minimize risks?
How to enter the Forex market?
Forex and currencies: how currencies work in the market
Volumes of trading in the Forex market
Dynamics of exchange rates in the Forex market
Does Forex result in success?
Currency behavior in the Forex Market
The Forex market: history
George Soros and his unique deal
Warren Buffett: Philosophy of Success
The first steps of the trader
Forex deposit
Example of how to make money in Forex
Withdrawal of profits
Fundamentals of work in the Forex market
Styles of trading in Forex
How to choose a strategy
The Best Way to Learn Forex Trading
Company Earnings Calendar
How to Start Forex Trading
How to Choose the Best Forex Broker
What is Forex Trading?
The Forex Economic Calendar and how to use it effectively
Exchange Rate Definition
Volatility Definition and Meaning
Volatility Index (VIX) Definition
What is Market Capitalization Stock
VWAP: Volume Weighted Average Price Definition
Buying On Margin Definition
Pattern Day Trader Definition and Rule
Market Risk Definition
How to Invest in Penny Stocks
Stock Beta: What is High and Low Beta Stocks
Selling Short: how to short a stock
Automated Trading Systems: The Pros and Cons
How to Invest in Oil
Stocks After Hours
The Best Forex Trading Platform in 2021
Automated Forex Trading Software For Traders
Forex Trading for Beginners: how to Trade
Forex Market Hours: Open and Close Time
Best Currency Pairs to Trade and Invest
What are Forex Signals: All Types of Them
What Are Forex Robots: Automated Trading Robots
Forex vs Stocks Comparisons
Ichimoku Cloud Explained.How to Use Ichimoku Trading Strategy
When Does Wall Street Open. Holidays and Trading Hours of US Stock Markets
Morning Star Candlestick Pattern: Definition & Example in Trading
What is a Margin Call? Definition, Calculation, Price Formula & Example
Shooting Star Candlestick. How to Trade Like a PRO Using Shooting Star Pattern
What is an ETF? Different Types of Exchange Traded Funds and How They Work
Dark Cloud Cover Candlestick: Definition & Example. Why This Pattern is So Important for Traders

MACD Indicator. What is MACD? How to Use It & Best Settings

Moving averages are very important for observing and ascertaining the current trends, be they short or long. They are very often used for keeping an eye on the average prices for several recent periods. A combination of these periods is what comprises a moving average. There is a problem though.

To grasp a truly clear picture of the current trend situation, traders use many different indicators and parameters, which results in an extremely littered chart. That’s when oscillators, like MACD, come into play. So, what is MACD?

What is a MACD?

Moving Average Convergence Divergence (MACD) isn’t really as complicated as its full name if you break it down.

MACD is a combination of three moving averages and one histogram (the vertical bars) that shows how different the parameters are. However, there are only two lines on the screen:

MACD’s (the indicator, not the line) job is to show how a recent trend changes in relation to the long ongoing market situation. That’s what oscillators do, they help you compare results. Sometimes the indicators can collect information for as long as 200 days, but that’s for long-term investment. MACD is working with much smaller periods.

How exactly does it work?

First of all, both lines waver around a zero line. A zero line is supposed to represent an average for the averages. It’s not moving, it just shows where the prices stop the most. In simple words, the trends get stronger the farther away indicators are from it.

So, if the MACD line is:

The direction of this line should tell you where the general trend is going. If the line is going towards zero, then the price is leaving the extremes, and vice versa. Similarly, the angle of the line should tell exactly how strongly the trend is developing. But you could read this on the standard graph – the MACD is just much cleaner.

Anyway, the MACD indicator has another line, the purpose of which is to show you an even fresher trend.

If the signal line is: 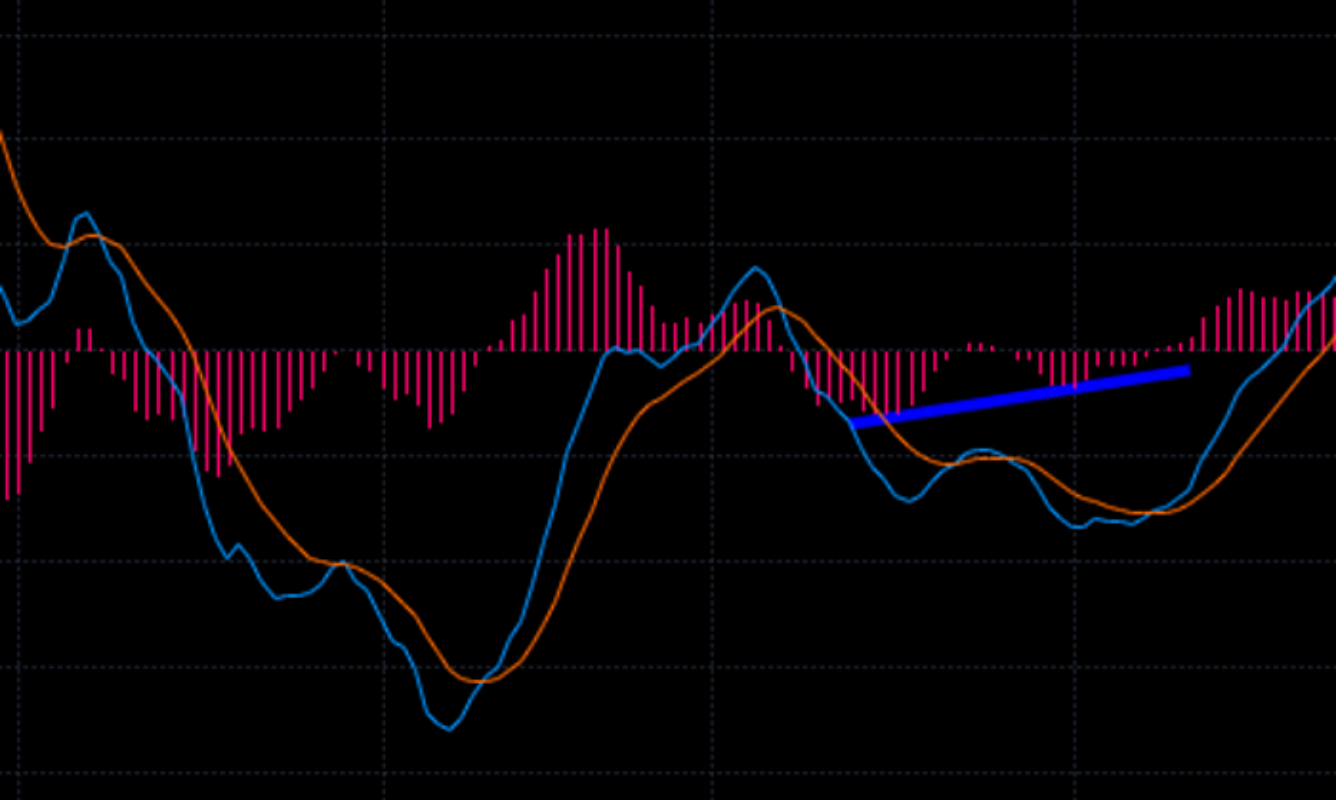 The logic is the same as with the previous pair. For instance, if the red line crossed the blue line from beneath, then some very recent changes have started to turn the trend upwards, even if the indicator that works with the larger periods of time (MACD) didn’t register it yet.

The histogram shouldn’t be underestimated even though the indicator is very often at the very bottom of your screen because just by looking at the size and coloring of the recent bars you can read the trend.

How to use MACD?

MACD is a personal and customizable indicator. A lot of brokers have it built-in right inside of their trading platforms, and you can often change settings. The most highly customizable parameter is by far the length of the indicators.

The 12, 26 and 9 periods are standard, but you can change them if you feel other moving averages better fit your trading approach.

Changing the parameters to larger periods will increase the time range, making it more suitable for longer-term investments. Still, it’s recommended not to wander too far away from the recent data because this oscillator has been created to register the difference between the short term and even shorter term data in a very sensible way.

It’s also best not to change the proportions in which the parameters of averages are at their standard settings, especially if you don’t know how to use MACD.

In the end, the best combination would still be the standard period range because MACD is very efficient at indicating the sensible recent trend changes in a very clean manner.

MACD excels at reading small changes during a very short period of time. It’s achieved by comparing an accurate MACD line to a sensitive signal line that collects the information over the course of 9 days.

As a result, it’s very efficient short-term, especially in conjunction with other tools that improve the experience of short-term investors, like the signal providers (not to confuse with the signal line inside this indicator).

For instance, a signal appears that the stock price can rise in the coming days. Simultaneously, the red signal line crosses the blue MACD line from beneath, which implies a sharp upward shift. Two facts match – the trend is going to rise.

Naturally, MACD shouldn’t be used as an ultimate indicator. Traders generally use it to confirm or dispel their suspicions, which ultimately helps make a decision.