Main Articles and lessons Morning Star Candlestick Pattern: Definition & Example in Trading
How to trade?
How to deposit?
Stop Loss
What is Forex?
Currencies in the Forex market
Geography of Forex
How to earn in the Forex market?
How to minimize risks?
How to enter the Forex market?
Forex and currencies: how currencies work in the market
Volumes of trading in the Forex market
Dynamics of exchange rates in the Forex market
Does Forex result in success?
Currency behavior in the Forex Market
The Forex market: history
George Soros and his unique deal
Warren Buffett: Philosophy of Success
The first steps of the trader
Forex deposit
Example of how to make money in Forex
Withdrawal of profits
Fundamentals of work in the Forex market
Styles of trading in Forex
How to choose a strategy
The Best Way to Learn Forex Trading
Company Earnings Calendar
How to Start Forex Trading
How to Choose the Best Forex Broker
What is Forex Trading?
The Forex Economic Calendar and how to use it effectively
Exchange Rate Definition
Volatility Definition and Meaning
Volatility Index (VIX) Definition
What is Market Capitalization Stock
VWAP: Volume Weighted Average Price Definition
Buying On Margin Definition
Pattern Day Trader Definition and Rule
Market Risk Definition
How to Invest in Penny Stocks
Stock Beta: What is High and Low Beta Stocks
Selling Short: how to short a stock
Automated Trading Systems: The Pros and Cons
How to Invest in Oil
Stocks After Hours
The Best Forex Trading Platform in 2021
Automated Forex Trading Software For Traders
Forex Trading for Beginners: how to Trade
Forex Market Hours: Open and Close Time
Best Currency Pairs to Trade and Invest
What are Forex Signals: All Types of Them
What Are Forex Robots: Automated Trading Robots
Forex vs Stocks Comparisons
Ichimoku Cloud Explained.How to Use Ichimoku Trading Strategy
When Does Wall Street Open. Holidays and Trading Hours of US Stock Markets
What is a Margin Call? Definition, Calculation, Price Formula & Example
Shooting Star Candlestick. How to Trade Like a PRO Using Shooting Star Pattern
What is an ETF? Different Types of Exchange Traded Funds and How They Work
MACD Indicator. What is MACD? How to Use It & Best Settings
Dark Cloud Cover Candlestick: Definition & Example. Why This Pattern is So Important for Traders

A Morning Star formation is one of the common candlestick combinations in trading. It’s a combo of three sticks that generally look like this:

This three-step movement is the Morning Star. The secret behind using it to your advantage and gain is to predict whether one is going to form or not in the coming sessions.

What does Morning Star mean?

It is important to note that the MS does not always form exactly like described above – it’s not a regularly occurring thing. The parameters can change, but what’s crucial is the meaning that a Morning Star has for the market.

A Morning Star can be pictured as a sort of horseshoe with a wide base. The prices are falling steadily, then the drop slows down and the trend is turned in a completely different direction. Most of the time, it happens when the volume of the asset in question is currently low. As a result, the demand rises and so does the price.

Typically, the volume rises significantly on the third day (when the bullish trend starts to mount) and the upward trend generally survives for some time, even if price growth can decrease or reverse slightly on the fourth day.

How does Morning Star come to be?

It’s not always sensible to expect the Morning Star pattern to happen whenever the asset volume starts to decrease. This formation represents a sudden desire of the market to balance out the uncontrolled downward trend that leads to overselling of security.

But it doesn’t always happen. Sometimes low prices and depleted volume lead to stagnation in the market. Low volume is not the only parameter that you need to use if you want to predict the trend overturn following the Morning Star formation. 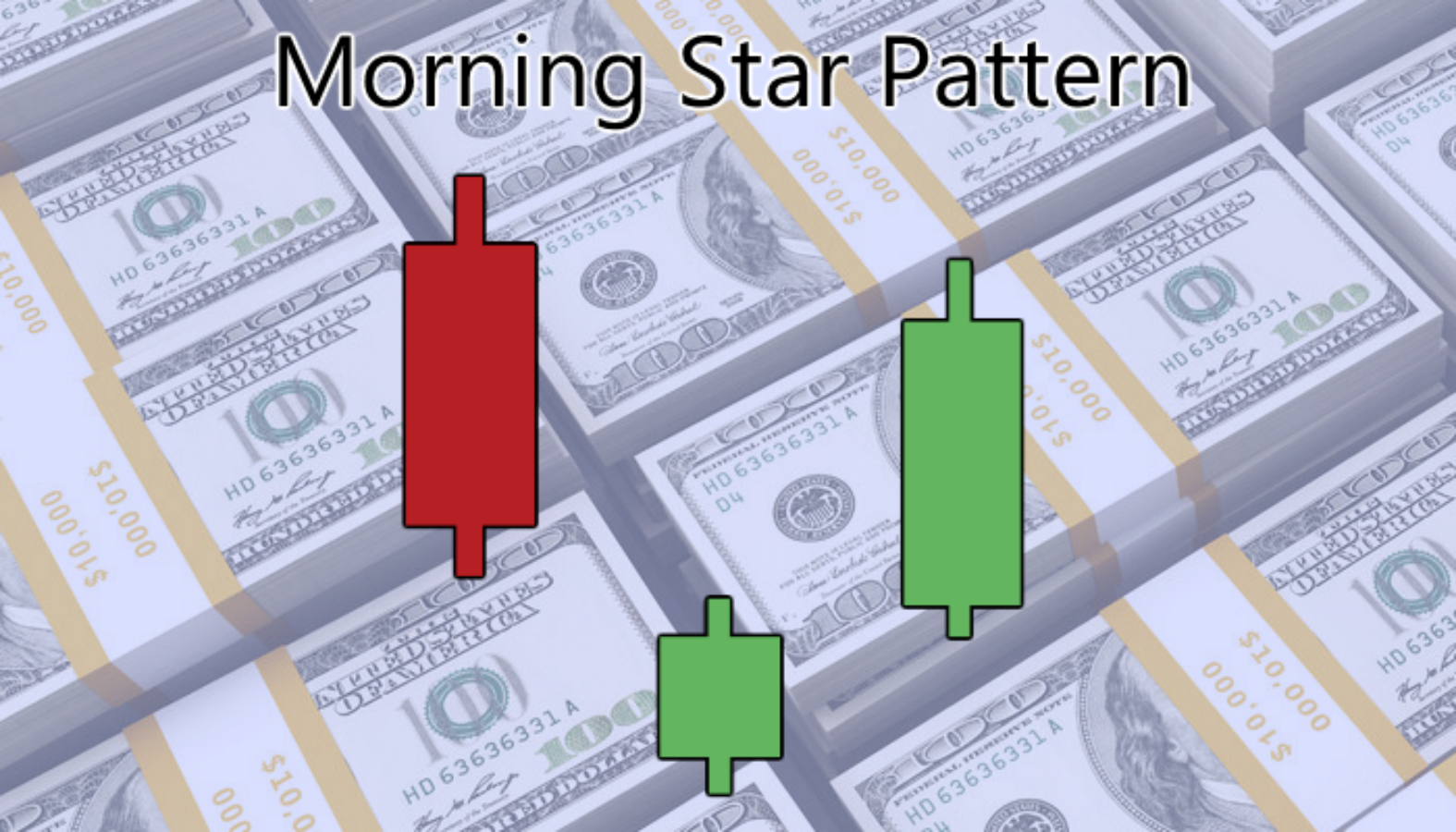 How to predict the Morning Star

There are several important parameters to keep an eye on. First of all, you’ll need to watch the traded volume both on the first and the second day. You don’t actually need to take exact numbers, average numbers and calculate whether the volume has reduced significantly enough. There is naturally an index ready to help you out.

The index in question is called a Relative Strength Index (RSI). RSI takes into account the sales from the previous sessions and estimates the current volume from 0 to 100. You can think of it as an asset popularity scale. If the scale is filled more than 2/3, it means the stock is overvalued. If the scale is filled less than 1/3, it’s undervalued.

So, whenever you see a <30 on the scale, you know that the current volume is much lower than usual, compared to the recent sales.

Identifying whether the asset is nearing the support zone is an equally crucial goal. The support zone acts as a kind of floor for the asset price. The chaotic market rules prevent the price to fall much lower than this – the market always tries to reverse the trend and push the price back. This is pretty much what happens when the Morning Star appears.

So, to sum it up – in order to identify the Morning Star you need to:

Identifying this pattern is actually fairly easy, the evidence being the Star itself. Whenever the second day is confirmed to be a part of the pattern, traders rush to buy the stock at a higher price exactly because they expect the trend to continue rising.

It’s something of a regular thing, really. Many people anticipate it to happen. Even so, the pattern can go horribly wrong if interpreted incorrectly. You always need to make sure the Star is going to form.

The Morning Star Doji pattern type is a bit rarer combination of the usual Star, but with the shorter wicks. Wicks symbolize the change between the opening and the closing prices, as you know. So, naturally, the shorter wicks mean the price change has slowed down even further.

This movement can only lead to a surge in price and volume (given, of course, that all the requirements for the Star to appear are met). So, the traders always keep an eye for a Doji star – it’s a sure way to hop onto the coming bullish trend.